Family tree of the Mitsuhashi family 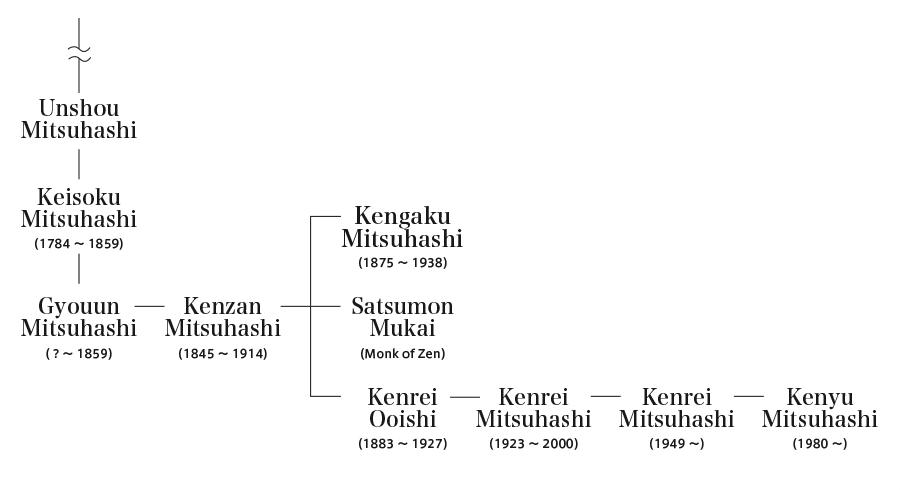 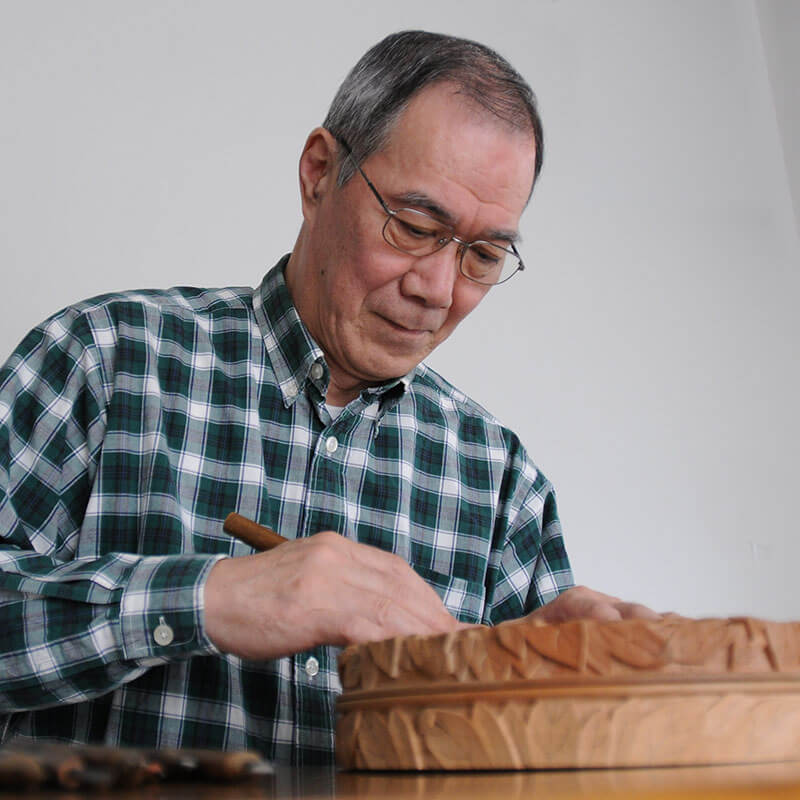 Kenrei Mitsuhashi, born in 1949, became a disciple of NIYODO in 1975 and studied under Kenrei Mitsuhashi the First. He actively held exhibitions at department stores nationwide and strove to showcase KAMAKURA-BORI as a work of art.
He dedicated ceremonial incense containers to Gyokurin-in of Daitokuji Temple in Kyoto during its major Heisei repair, and to Kenchoji Temple in Kamakura in 2012.
The container at Kenchoji is currently being used in one of its most essential ceremonies. 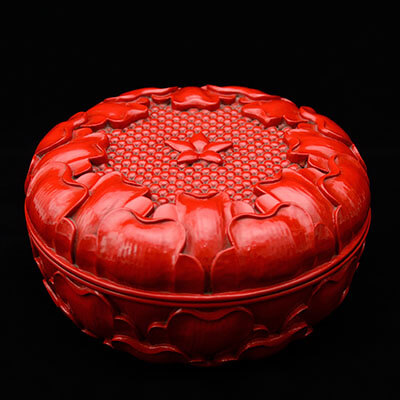 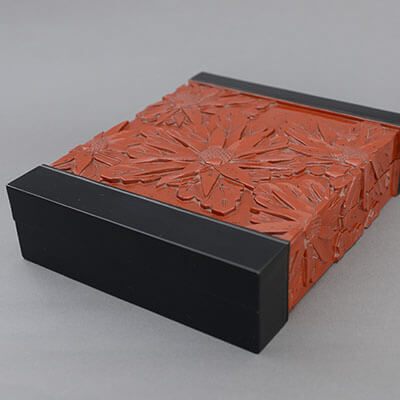 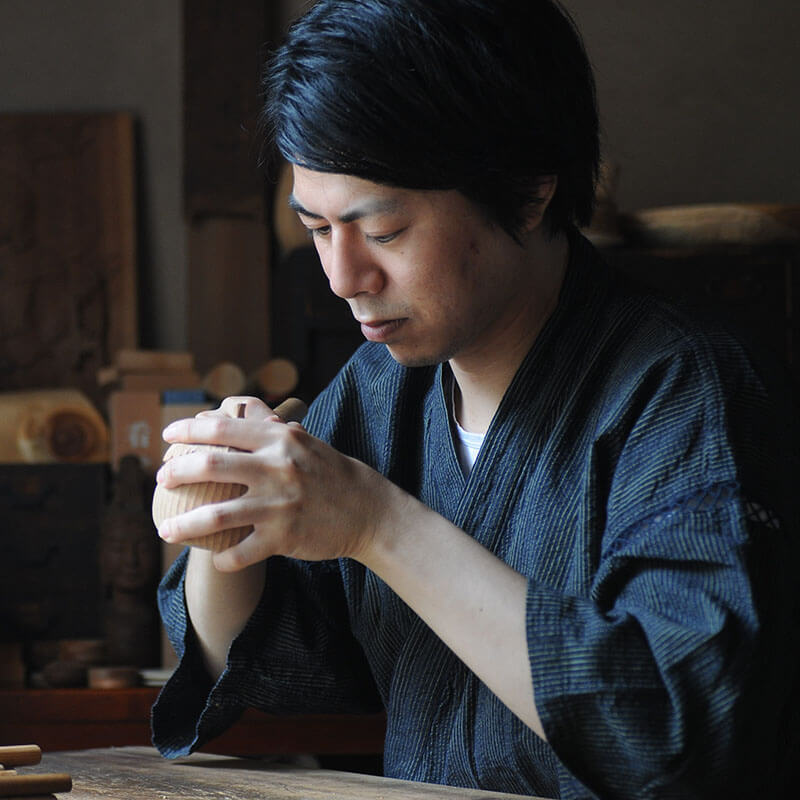 Kenyu Mitsuhashi, born in Kamakura in 1980, is a descendant of Busshi, professional Japanese sculptors specializing in statues of Buddha. His family's lineage originates in the13th century, during what is known as the Kamakura Period. In 2000, he studied under his father, Kenrei Mitsuhashi.
To acquire his self-discipline and the original intent as a Busshi, he studied Zen(禅) at Kenchoji Temple, the oldest Zen training monastery in Japan. In 2010, he was given the title "KENYU" by the Zen master Yoshida from this temple.
He produces traditional tea utensils and Buddhist altar fittings, while at the same time, introduces modern works of art to people all over the world. 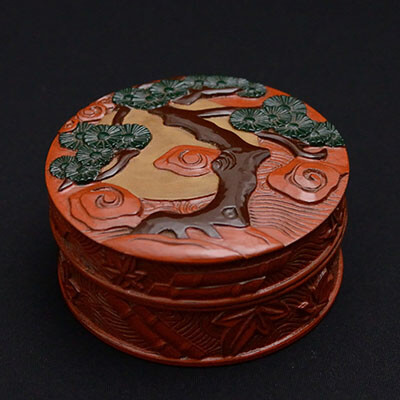 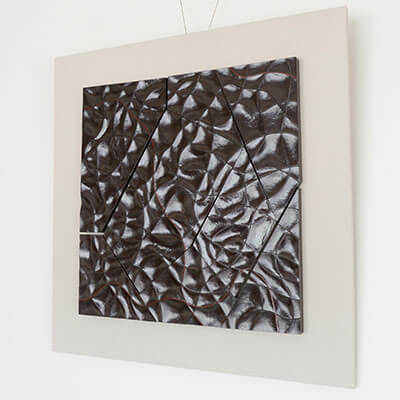 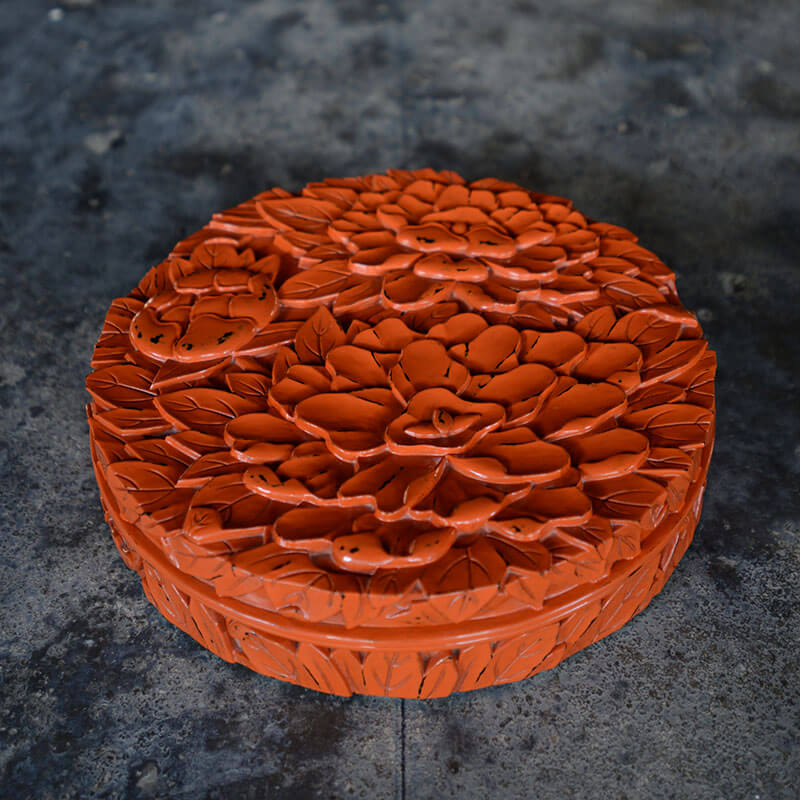 KAMAKURA-BORI is a traditional art craft that has 800 years of the history, originated from Buddhist altar fittings at Zen temples in 13th century. Sculptors produce the crafts with the technique of engraving woods and applying the japan lacquer.

KAMAKURA-BORI is an exceptional art that has a soft texture from woods, a dignified atmosphere from the sharpness of the engraving knives, and a gloss with strength from the japan lacquer. 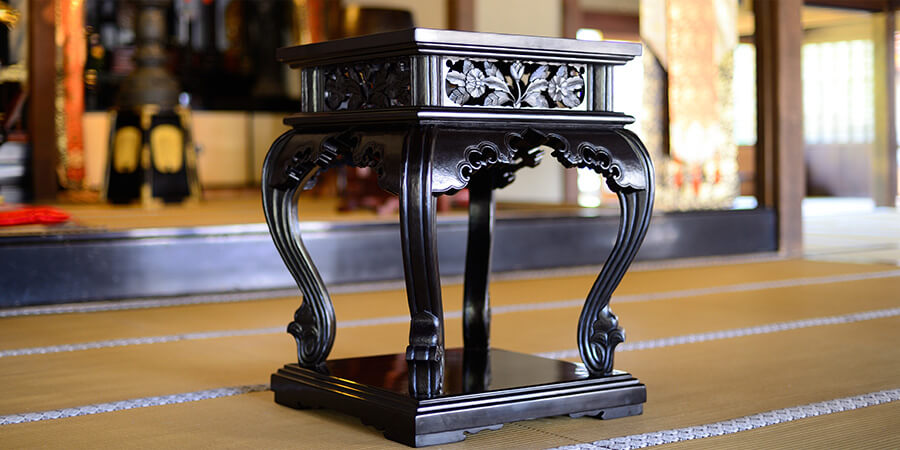 The roots of NIYODO are descended from Busshi, professional Japanese sculptors who specialized in statues of Buddha during the 12th century (also known as the Kamakura Period). The family has been keeping to their outstanding KAMAKURA-BORI techniques by understanding the changing times.

To be a professional NIYODO sculptor, one is required to create a wide-range of artworks, such as statues of Buddha, Buddhist altar fittings, and traditional tea utensils. Despite this variety, it is believed that the origin can be traced simply to the spirit of Zen (禅). In regards to Buddhist altar fittings, KAMAKURA-BORI sculptors have been engaged in creating implements, including embellishments, for Zen temples around Kamakura, Kyoto and other historical areas.
KAMAKURA-BORI has literally been advancing thanks to Zen teachings. 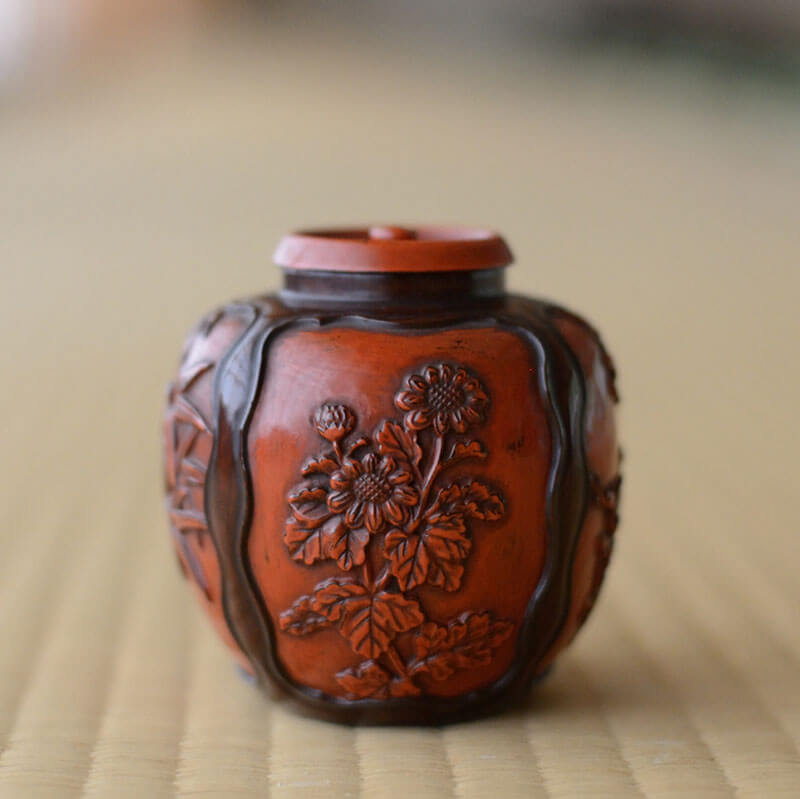 Regarding tea utensils, incense containers made in the style of KAMAKURA-BORI were highly regarded by Takeno Jōō, a master of Sen no Rikyu in the Muromachi Period, as well as by Nobunaga Oda in the 16th century during the Sengoku Period.
Some of these utensils still remain today, which shows just how essential they used to be for people in power during that time.

NIYODO dedicates its work to the mimicking of historic tea utensils from the Muromachi and the Edo periods (1300-1800AD), and to the traditional tea utensils produced for the Iemotos, the grand masters of tea ceremony. 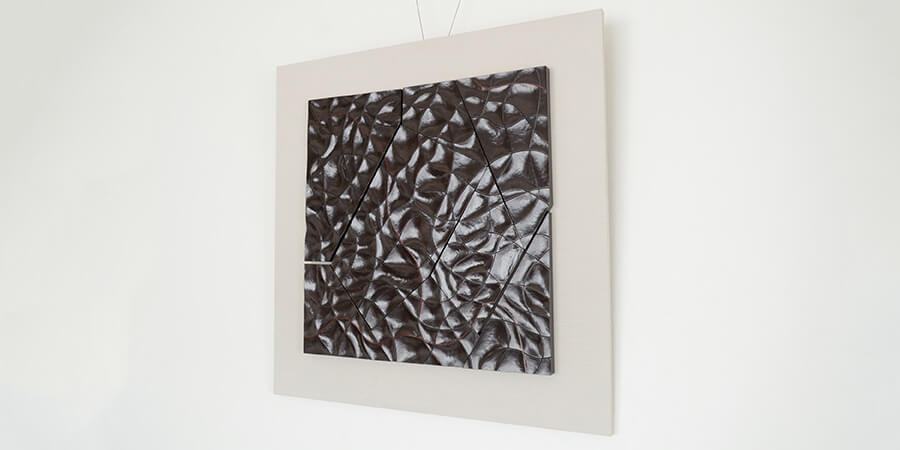 NIYODO utilizes and expresses its 800 years of tradition in styles that meet the demands of everyone living today.
We, NIYODO, continue to introduce KAMAKURA-BORI to people all over the world as a symbol of Japanese beauty.

In recent years, NIYODO has exhibited their influence in not only the artworks at temples but also in the decoration at one of the highest-rated hotels. These engagements enable you to enjoy the latest style of Kamakura-Bori.

As you ponder on the samurai, through the craftsmanship of Kamakura-bori which we inherited from the time when samurai were all around us, I hope you will come to better appreciate the fine sense of Japanese aesthetics.

Enrich your time with KAMAKURA-BORI

This artwork can be used as a setting to serve confectionaries such as macaroons, chocolates, and cakes. 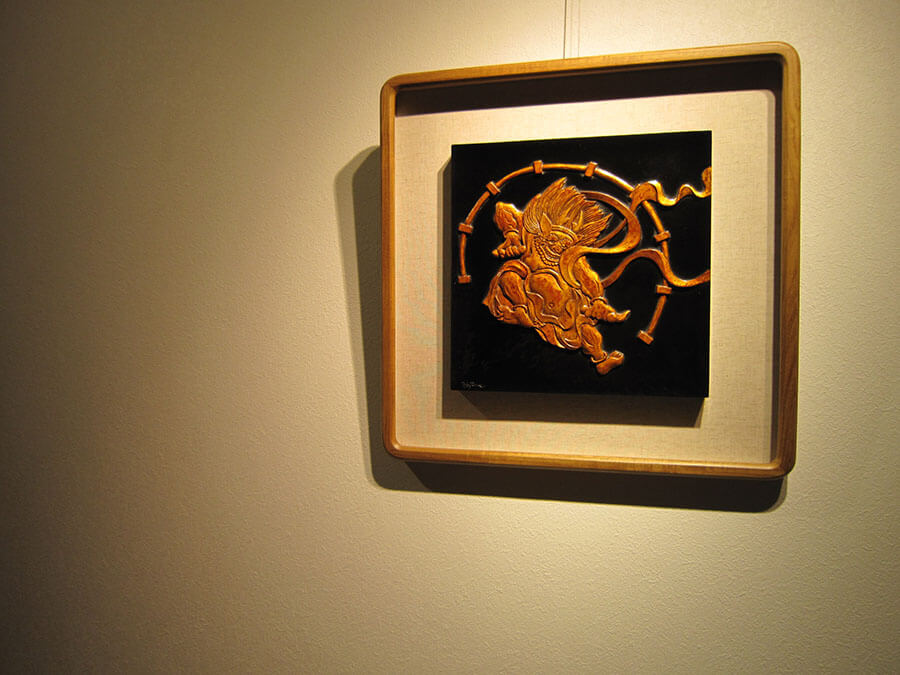 It has been produced in traditional techniques and curved wood, repainted lacquer.
You can enjoy its gentle and shiny appearance and its luster of Japanese traditional lacquer by hanging it on the wall.

A variety of tools essential to production 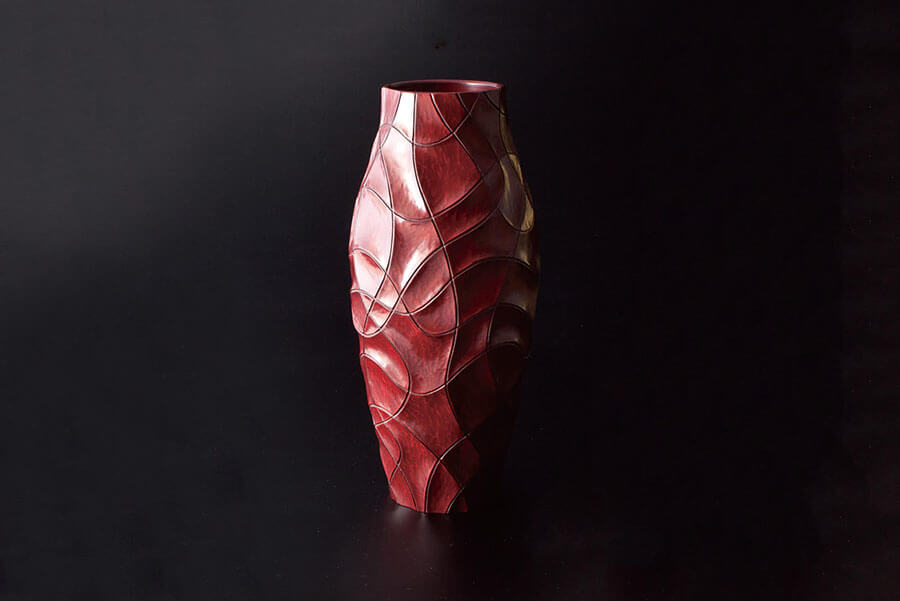 This is Kenyu's original pattern that instills images of the ocean's surface as seen from underwater.
Here, he expresses light streaming through the ocean's shimmering surface in Kamakura.
The softness of his sculpture and the laquer's glaze are, to the utmost extent, expressed in this artwork. 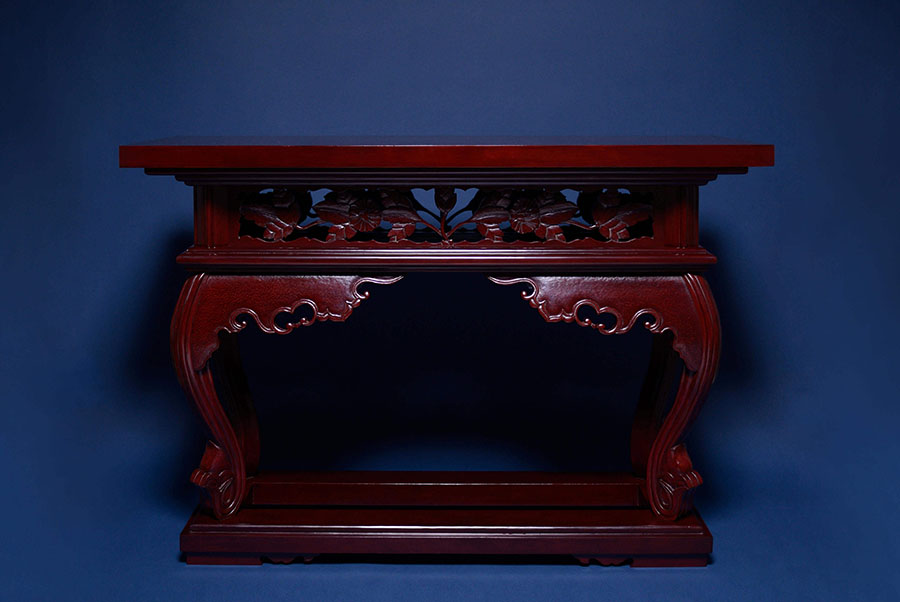 Japanese craftsmanship has been passed down continuously by the confiding of secrets from father to son, just as I inherited my own craftsmanship from my ancestors who looked after it reverently for a long 800 years.
I feel this is really what Japanese aesthetics is all about.